Check out our most recently completed projects below. 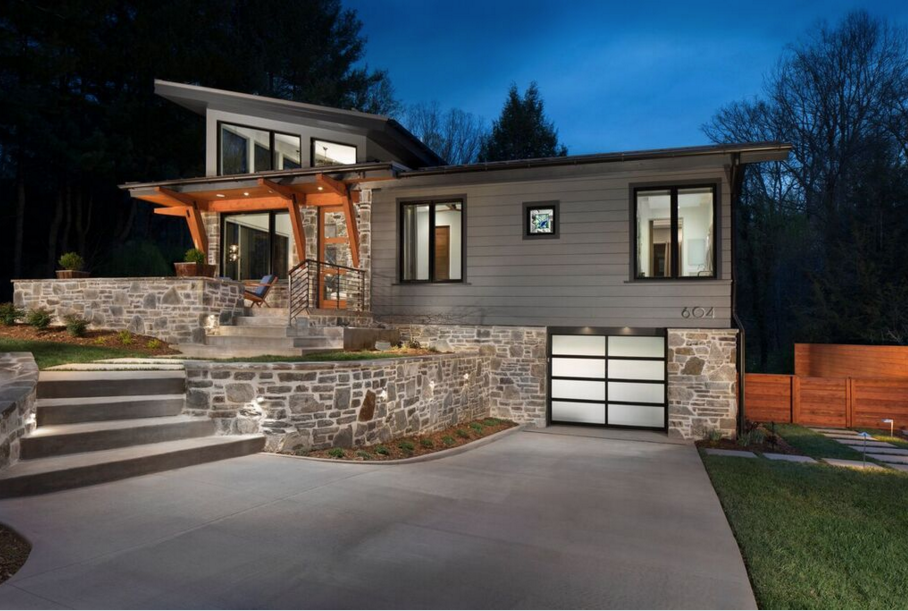 My wife (Laura) and I decided to buy a 1960’s rancher in downtown Black Mountain to renovate for ourselves. We liked the feel of downtown and wanted to be close in to the lake, park, pool and center of town. We had our work cut out for us though since the home hadn’t been touched in nearly 40 years!

The 900sf shack sat on a crawl space situated nicely on a corner lot near the golf course. Believers in making all things beautiful, and the desire to give every home we touch “curb appeal”, we first nailed down the floor plan. We wanted to keep as much of the original structure as possible, leaving the two exterior door locations, existing room layouts (virtually the same), as well as leaving the original location of the hallway and common bath. Because we had to combine the two end bedrooms into a master suite, we needed to design a small addition on the back to replace the lost bedroom and give the home a proper kitchen.

We enlisted the help of an architect partner to help create the new style, passive solar design, and get the exterior elevations just right. After that was nailed down, we set out to make this the most efficient use of space we could create. Since most of our clients end up building homes larger than they had originally intended (due to having lower levels on sloping lots), we wanted to show what it meant to “right size” a home.

“Right sizing” a home means that you prioritize “quality over quantity”, rather than the premise that “bigger is better”. As green design+builders, we also wanted to show that saving a home in an existing neighborhood is priceless when you want to be able to walk to what’s important to you. We designed this home so that the 1450hsf main level would be all that we would need on a daily basis. We utilized the lower level of the new addition by designing it to be a separate art studio for my wife who is not only an interior designer, but also an artist.

The crawl space that adjoined the existing one car garage was dug out by hand in order to create space for the mechanicals, storage, extra bathroom, and tv/bedroom for the (occasional visit from the) college student. We intentionally did not include an interior staircase so that these overflow spaces could be used when there was want, but not out of need.

Now that the spaces were identified, Laura went about designing each space for maximum use and aesthetic value, while I worked with our Energy Rater to make this the most energy efficient and green project we possibly could. We began with saving the existing (sinking) foundation by having helical piers rammed into the earth beneath the South corner. We also discovered that the previous tenant had been an earnest gardener so we gave away most of the plants in the yard (that we couldn’t use) to interested neighbors and the adult children of the (now deceased) previous tenant.

Saving as much of the structure as possible and still be able to get the home certified, we left the exterior 8’ walls, but raised them to 9’6” by running beams around all the top plates. The exterior walls were then wrapped with foam board insulation to seal off any air infiltration and add maximum insulation values. Wanting a new contemporary look to the home, we opted for a glass garage door as an entrance to the art studio. The only calculated energy loss to the project, we felt it was important to get light and ventilation into the space.

Most visitors get caught up in the details of the architecture, interiors, and furnishings while others can’t believe that the home is only 1450 hsf on the main level. The “outdoor living” spaces are connected to the home by the use of glass, slider doors, and wrap around porches and patios. True energy connoisseurs like myself are all about the “performance” of the home though. The mechanical room contains the air handler for the geothermal hvac system, ERV, dehumidifier, built-in floor drain and electrical panel that pipes in the solar from the roof. You wouldn’t know that the home had solar though because the panels are cleverly hidden behind the butterfly roof facing due south. 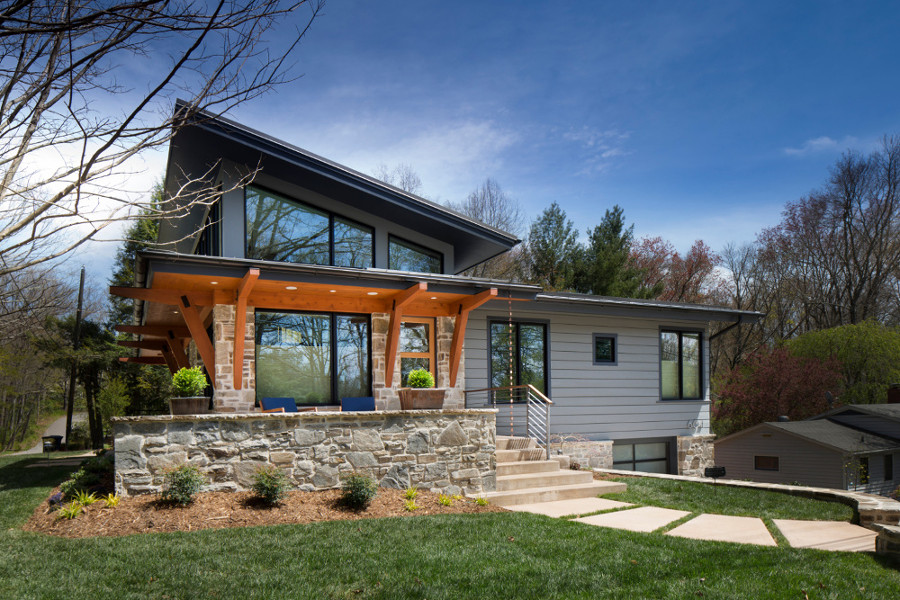 One of the biggest surprises has been the “wine room”. It started out as just a wine closet in the corner of the basement next to the mechanical room. However, when we decided to use the “jail house” door that was given to us by Laura’s aunt, it became an all out cellar clad with stone all the way up to the 7’ ceiling. We took a slab of oak from a recently timbered tree (to create a table top) and created wine bottle holders by building a plywood box beneath it and a shallower one above it with 1” holes in it to hold the “necks”. Lastly, we ducted in the cool exhaust air from the heat pump water heater in the room next door to “chill” the bottles.

As construction drew to a close, we finalized trim and furnishing details. The left over trim materials were recycled to create a “puzzle trim” detail for the base of the island and as an accent wall in the master bedroom. Saved slabs of walnut were used to make the dining room table that we designed as well as misc. shelving. Our middle sons bed was built from shiplap siding that was left over and Laura’s art hanging wall was finished with the recycled stained t&g soffit material.

A lot of thought, planning, and ingenuity went into getting the Platinum certification we received from the NC Greenbuilt program as well as the low HERS score of 30. It is very satisfying to see how well the design worked on the lot, how effective the spaces have become, and how comfortable the house is. However, the greatest satisfaction that we have achieved through this exercise in “right size” design is that we get to call this place…home.